I see a lot of Halictus bees around.  The females have a slit at the rear of their abdomen but this feature is shared with Lassioglossoms so it is not definitive, but it helps.  They often have white hair bands on their abdomen.  They often nest in aggregations and I see lots of signs of bees nesting in the sandy/chalky soil of this area. 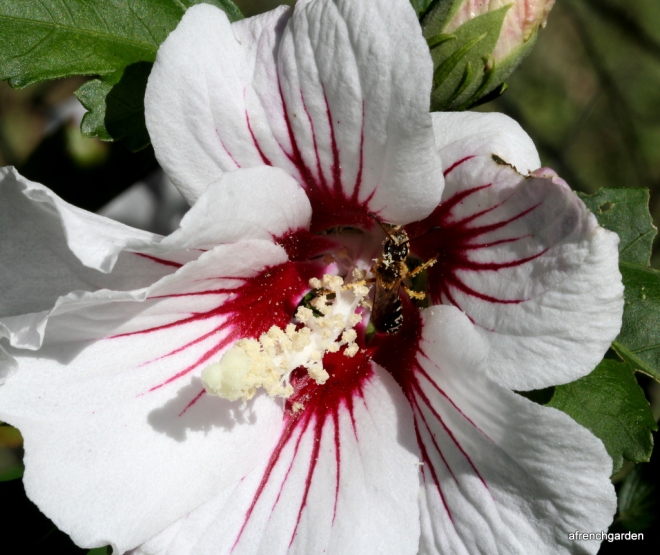 I see them on a lot of the flowers in the garden.  Here the bee is on Hibiscus syriacus, this is in the Malvaceae family, at the end of September 2013.

Here on Centaurea nigra (common knapweed) in the Asteraceae again towards the end of September 2013. 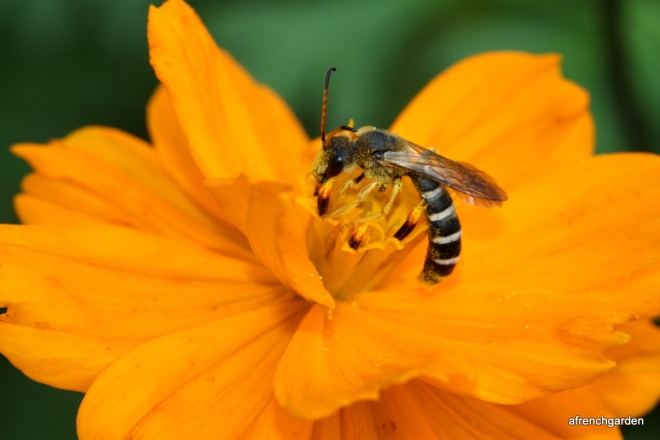 And again on the Rudbeckia (Asteraceae) at the beginning of October 2013. 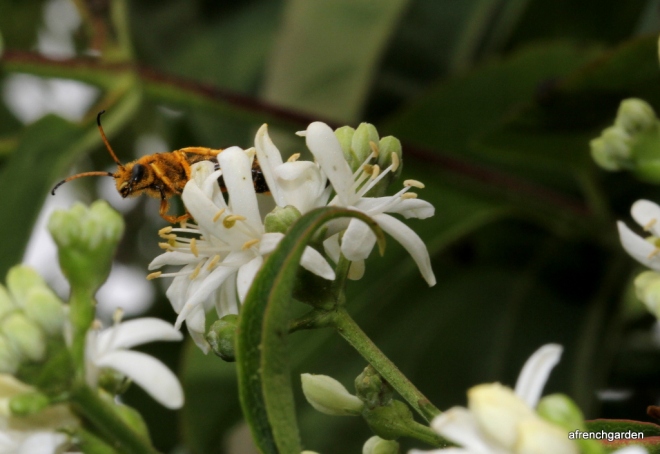 But here on the Heptacodium jasminoides (Caprifoliaceae or honeysuckle family), the male Halictus sexcinctus displays his two-tone antenna which end in a  hook shape.  This separates him out from the other Halictes I see in the garden.

I was trying to take a photograph of the female on a Dahlia at the end of August last year when the male rapidly descended on her.

This shows a good view of the male’s face.

The female was little concerned with the male’s interest.  She appeared more interested in gathering nectar but you can see the pollen hairs on the hind femur and tibia full of pollen.  You will also notice I have a problem with snails eating my dahlias.

This picture gives an idea of the difference in size as the heads are one above the other.  The male’s head is smaller and his body longer and finer than the female.

I watched them for six minutes.  The male did not relax his attention and the female did not appear any more interested during this period but the action was rapid, too rapid to deduce whether he was successful or not.

My identification of Halictus sexcinctus takes me up to fourteen in the twenty I’ve challenged myself to identify.  My problem is that I have been too slow at sorting out last years pictures before I am being overtaken by lots of lovely interesting bees appearing in the garden.