It was a beautiful day on Sunday (18.7.2021) and I thought I would have a look at the bees on the flowers in the garden. I saw one on the Cosmos that I did not recognise.

Luckily I got a shot of the wing venation, and it is luck for me because it depends on the angle of the sun and how long the bee will stay in place.

The two sub marginal cells allowed me to confirm that it was a Megachile.

I would always like to go further but it is impossible to be precise from a photograph and I am not an entomologist, so I do not capture the bees for a closer look.

He looked like a male but I could not recall ever seeing him before but I had seen photographs on the internet.

This made me wonder if it was a Lithurgus chrysurus male. These are Mediterranean bees – but I am further north in the Charente Maritime.

They build their nests in dead, dry often rotting wood or even cow pats. Well, we have plenty of rotting wood left around the garden and certainly in the woods around us. Another feature is the extra long tongue which facilitates getting nectar from some plants such as the Centaurea. Cosmos is in the same family of Asteraceae so perhaps my bee is happy with my cosmos. He certainly had a long tongue.

So, I cannot be certain of my ID but he is very welcome in the garden and I am fascinated by his beautiful green eyes.

These photographs date back to 31 May 2014.  May is a very busy month in the bee hotels.  The bee hotels are much busier than I had ever suspected.

On 24 May three different species of bee were emerging at the same time so it was difficult to concentrate on what to focus on.  The bees emerge daily and I visit with my camera in hand.

On the 31st I saw something starting to emerge.  It looked different but I was hoping for yet another bee species.  Then I thought perhaps a solitary wasp but I think what I have here is a parasitic fly, perhaps a Leucophora species.

I have seen what I think are Cacoxenus indagator , with their red eyes, around the hotels in the past but these are tiny fruit fly sized creatures.  The hole that can be seen in the photograph of the fly has a diameter of 7-8 milimetres, which makes the fly coming up to 2 cm. long

Unfortunately, I saw a similar for the second time on 28 September 2014.  It was examining my newest bee hotel.  Because I had put it up so late in the season only Anthidium manicatum has nested here.  This sort of bee hotel can be opened so it is something I can look out for when I open it.

Any information anyone has on these flies would be greatly appreciated. 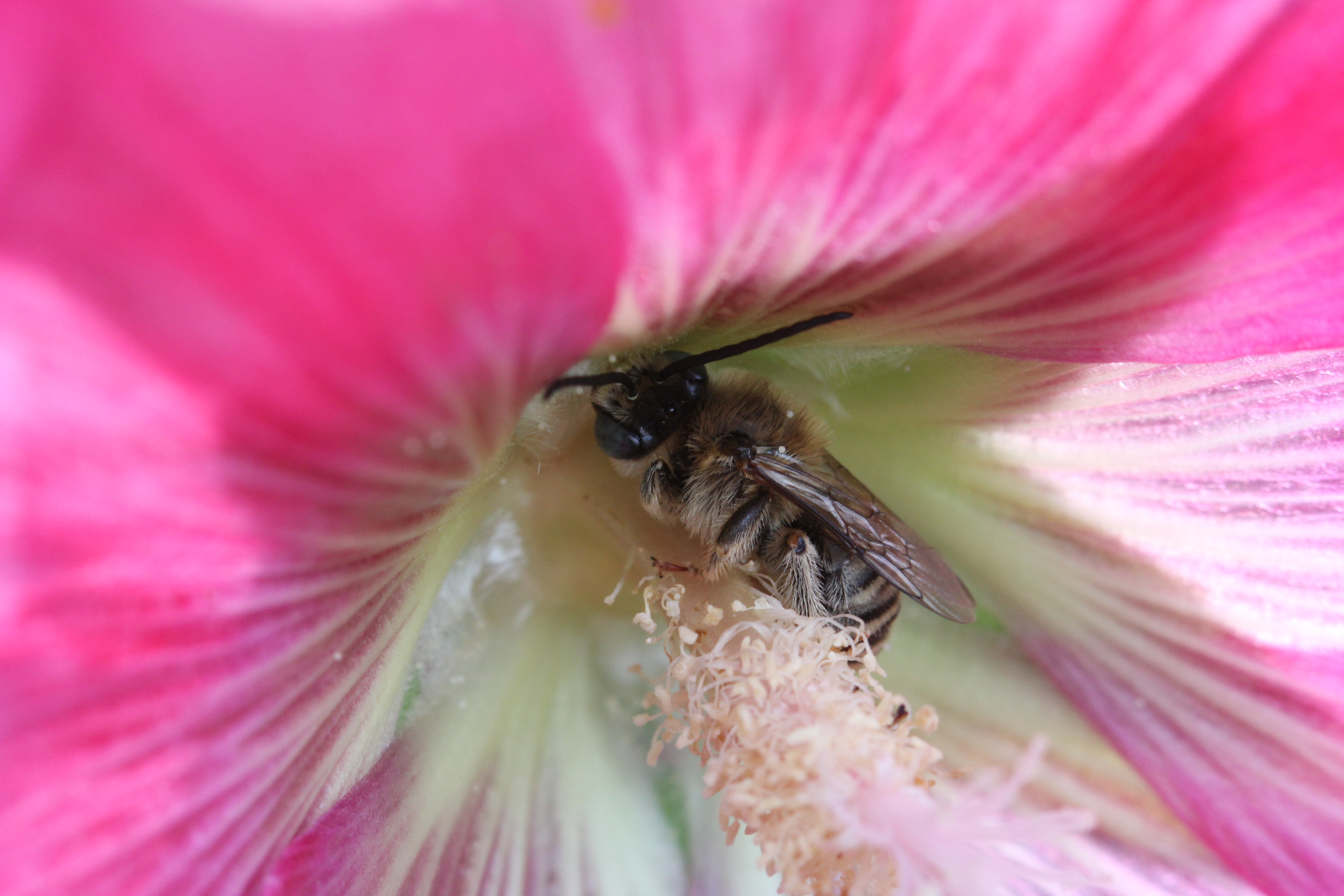 The Hollyhocks are doing well in the garden and with the sunshine I have found the Tetralonia returning to the Hollyhocks.

I am ever grateful to a commentator, el. gritchie, who pointed me in the right direction when I was totally unaware of this genera. 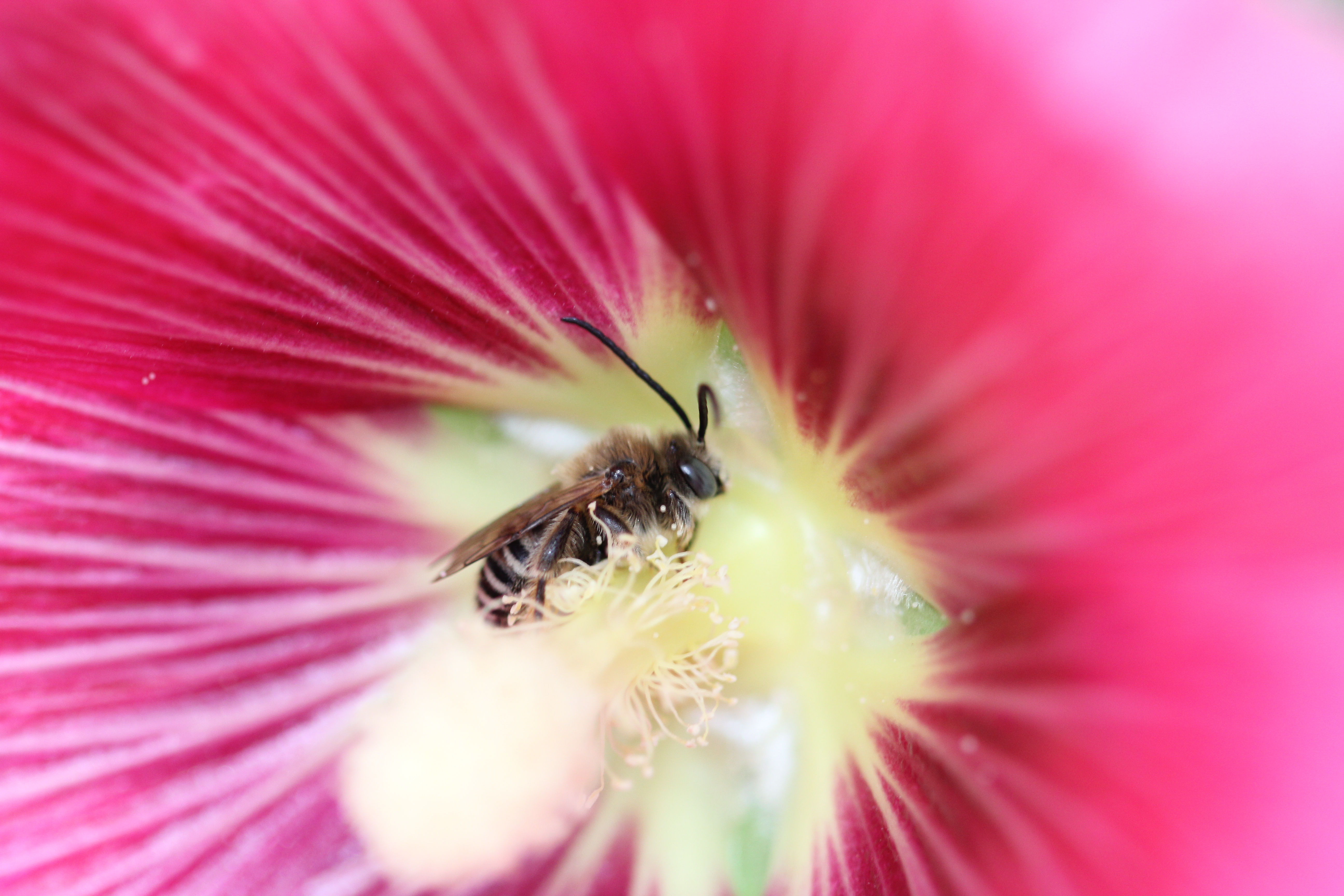 I love checking out the hollyhocks in the evening as there are always Tetralonia bedded down from the night.  Hollyhocks are Alcea, part of the mallow family Malvaceae.  This would point to an identification of Tetralonia malvae for these bees.  However, I can find out very little information about them and so I could easily confuse them with other species in this genera.

I took the opportunity to pop this poor unsuspecting bee into a plastic pot after it had settled down for the night in one of my hollyhocks.  After a little while in my fridge he was even sleeper and I managed to take some posed photographs.

Unfortunately, I am really none the wiser at the moment but I now have some photographs for future comparison.  He was then placed back in the same Hollyhock.  I have noticed they can return to the same flowerlet on subsequent nights.  The hollyhocks provide good protection from the elements during the night and I suppose there is a fresh supply of nectar ready in the morning.

I have another beautiful plant in the garden that also grows in the woods nearby.  It is Althaea officinalis, that is Guimauve or Marsh Mallow also from the family Malvaceae.

The marshmallow pink colour of the Guimauve pollen makes the female Tetralonia even more spectacular.