On the fourth of September last year I noticed a hole in my bee hotel had been beautifully sealed by carefully arranged sections of rose petals. (See Some Megachile).

On the 24 of May this year I noticed a hole had been chewed in the centre of it.

I could not resist removing the remains of the rose petals to get a better look.  A new little bee was making her way into the world.  However, it was 19.20 and domestic duties called and the light was fading for photographs.

It was 11.04 the next morning before I was able to get back to my bee and she seemed just to be waking up.

Seven minutes later and she was not  making an enormous progress.

Then two minutes later there is movement from the hole above her.

Now which one should I focus on?  The other one is larger and not the same species.  Very interesting but I do not want to lose my rose petal bee.

After a couple of minutes hesitation the big bee launches itself into the air.  Sorry about the blur but it was the best I could do.  I have no idea what species it was.

Back to my rose bee that has been emerging gradually for the last  34 minutes.  She seemed to have a considerable difficulty pulling herself through the little hole she had chewed in her leaf capsule that had been her home since last September.

Finally after watching and taking photographs of her for 35 minutes she emerges onto the outside of the log.

She paused momentarily before taking off.   After this first one, many others emerged from the same hole in the following few days, usually taking less time to exit than this first one.  Sometimes it looked as if the bee next in the queue was giving encouragement from behind because as one took off, another little head appeared at the hole.

Could this be Mummy emerging from another hole in the log on the 26 August last year? 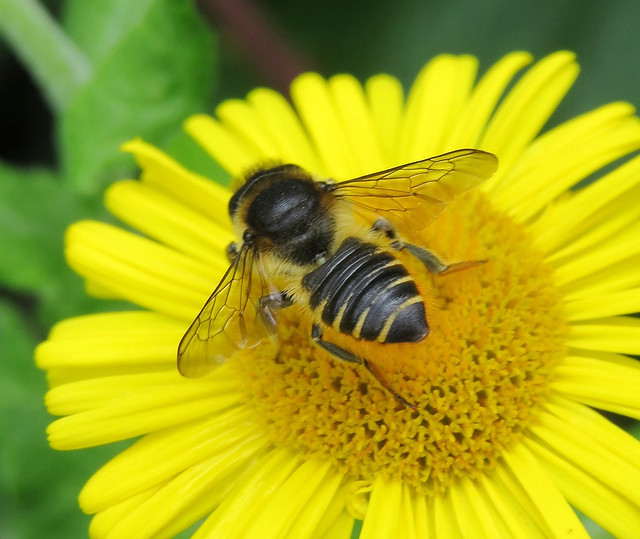 , he says females can be distinguished from some other British species by the bright orange pollen brush that remains orange haired to its tip (black-haired at tip in some others).

Well, even if I cannot be 100 percent sure of my French bees at least I can say I breed beautiful bees!

23 thoughts on “A Megachile emerges”